The following gives brief overview of the share of women on higher academic positions in Estonia compared to other EU countries as well as describes the problem of wage gap in Estonian academic institutions. It also gives light to the gender composition of mayor scientific decision making bodies in Estonia.

Please refer to the sources (including Estonian Research Council)!

Share of women in Grade A positions in higher education

Share of women in Grade A positions (professors) in higher education as a percentage of all such research positions is the headline indicator of European Research Area (ERA) 4th priority (gender equality and mainstreaming). This indicator is meant to assess the representation of women in the highest echelons of the research world (top-level academics)8. 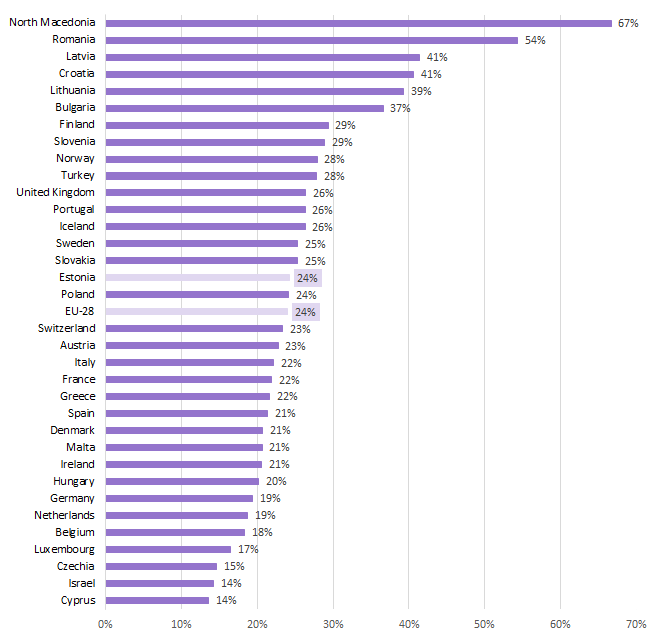 Gender pay gap on diagram 2 represents the difference between average gross hourly earnings of men and women (as a percentage of average gross hourly earnings of men). The indicator is „unadjusted“, since it does not take into account the proportion of men and women in different positions. Thus, this indicator does not explain how much the wage gap was due to higher proportion of men working at positions generally having higher salaries and how much it was influenced by higher wages paid to men for the same work with his female colleague. 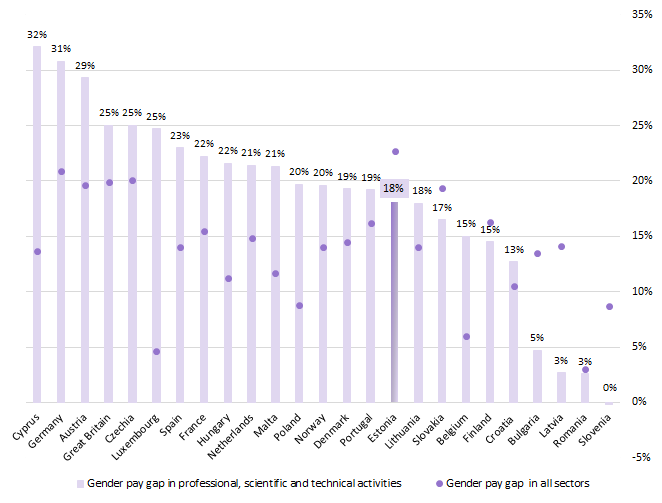 Gender pay gap the table 1 below represents differences between average monthly salaries on full-time positions (FTE) of men and women on different academic positions (as a percentage of monthly earnings of men). Thus, pay gap below expresses the percentage women get less paid than men.

Table 1. Gender pay gap in six Estonian public universities by academic positions on 31.12.2018.
Data: Universities Estonia
* The position is not filled or the number of full time equivalents is less than five.

Large differences between full averages and institution based numbers were due to disproportionately large share of women on lower paid positions. For example, for teacher positions, women hold 52,6 FTEs altogether while men had only 17,4 FTEs. The average wage of teachers is the lowest for both men and women. For example, at the University of Tartu the gender pay gap for teachers is 15%, but men hold only 11,6 FTEs whereas women hold 34,7 and meanwhile teachers are the least paid academic position of all at the University of Tartu. Therefore, the large proportion of low-paid women working on teacher positions have a great impact on the full average (over all institutions) pay gap of teachers. So, women earn less than men on the same postition as well as women are less represented on more paid postitions (i.e. on higher level of academic positions).

Balanced representation of men and women at scientific decesion making bodies is one of the prerequisites for addressing gender imbalances in research. In EU research and innovation funding programme H0rizon 2020 gender balance is a cross-cutting issue and achieved through three objectives of which one targets the gender balance in decision making bodies (40% of the under-represented sex in panels and groups and of 50% in advisory groups)9. The following is the overview of gender composition in three mayor scientific decision making bodies in Estonia: Research and Development Council, Research Policy Commitee and Evaluation Commitee of Estonian Research Council.

Figure 3. Members of Research and Development Council by gender 2010-2020.

Figure 5. Members of the Evaluation Commitee of Estonian Research Council by gender 2012-2019.